Fly and Shoot Tower Defense Shoot and Throw Fly and Shoot Run And Shoot Arena Fight Bomberman
Space Blaze is my new favorite game! I started out by choosing my space ship to enter the battle. Next, I used my arrow keys to move, while my spaceship shot the enemies and I collected the stars. While flying through space, I tried to avoid enemies who were returning fire, but they were too strong. Space Blaze is very addicting! After I played for a half hour, I decided to introduce the game to my nine year old son. He loved the game just as much as me! We will definitely be competing against each other's high scores, as we earn stars to buy new space ships! 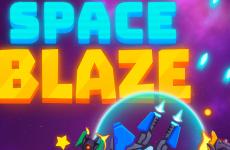