Stunt Riding Uphill Racing Circuit Racing City Race Crazy Race Pimp My Ride Horse Riding
City Car Stunt is the name of a game on the Internet that's all about the many diverse thrills of driving in the big city nowadays. It's a two-player favorite that enables players to drive their vehicles over streets that are higher up. It enables them to do more than that as well. That's because City Car Stunt is all about going forward with stunts of all varieties, true to its naming. Players can opt for cars that correspond with how they feel at the moment in time. They can battle it out throughout the course of six demanding and unpredictable tiers. They can zoom over ramps as they wish. Despite that, they have to remain on the streets consistently. 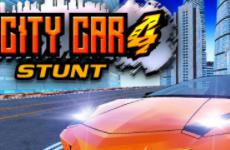